Safety First: Time to deliver on commitments to women and girls in crisis

Gender Based Violence is a global epidemic. The IRC estimates that 14 million refugees and displaced women and girls were subjected to sexual violence in 2019. However less than 0.2% of all global humanitarian funding between 2016-2018 was allocated to GBV prevention and response, and women and girls are often invisible in country’s action plans for the Sustainable Development Goals. This report highlights some of the links between GBV and key SDGs to show where GBV prevention and response needs to be integrated across sectors to address the double disadvantage faced by women and girls in crisis. Read more here.

In 2013, world leaders, convened by the governments of the United Kingdom and Sweden, came together to launch the Call to Action on Protection from Gender-Based Violence in Emergencies (English, French, Spanish, Arabic), a multi-stakeholder initiative that aims to drive change and foster accountability across the humanitarian system to address GBV, particularly against women and girls. Four years on since the launch of the Call to Action, the IRC commissioned a review to understand its impact on mobilizing resources, attention, and programming to better prevent and respond to GBV. The review found that the Call to Action has been catalytic in driving forward new, faster changes that maximized the impact of efforts to strengthen GBV programs and advocacy in place prior to 2013. The report highlights key findings, identifies gaps in the initiative, and proposes recommendations for further action. Read the  Executive Summary. As well, read the Full Report (English) or Full Report (Spanish).

Are We There Yet? Progress and challenges in ensuring life-saving services and reducing risks to violence for women and girls in emergencies

In October 2012 the IRC released a report (Lifesaving, Not Optional) which analysed the obstacles to effective responses to gender-based violence (GBV) in four different humanitarian crises, and we found a systematic failure to prioritise GBV in emergency response. In an effort to examine progress in the field since 2012, our latest report Are We There Yet? compares four additional emergencies –the Central African Republic, South Sudan, Iraq, and the Ebola Virus Disease crisis in Sierra Leone. This paper assesses the response to these ongoing emergencies in terms of how GBV has been prioritised in funding streams, the quality of GBV coordination efforts, implementation of GBV risk reduction guidelines across sectors, and the delivery of specialised GBV services. Read the report here.

One year after IRC’s ground-breaking report, Are We Listening?: Acting on Our Commitments to Women and Girls Affected by the Syrian Conflict, the United Nations has completed one of the report’s key recommendations: a real-time evaluation of the humanitarian community’s implementation of inter-agency guidelines to prevent and respond to GBV in the Syria region. The evaluation was supported by a Steering Committee comprised of UNFPA, UNHCR and UNICEF, along with IRC and the International Medical Corps, and was conducted from June to July 2015 in Lebanon, Jordan, the Kurdistan Region of Iraq, and Northern Syria. The report, which focused on the health, WASH, and shelter sectors, reveals a significant gap between policy and humanitarian practice to protect women and girls in the Syria response, and offers recommendations to improve coordination, leadership, and accountability of GBV interventions across the region. Read the report in English or Arabic. 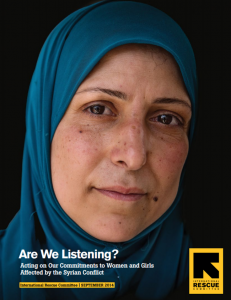 Are We Listening? Acting on Our Commitments to Women and Girls Affected by the Syrian Conflict

For millions of Syrian women and girls displaced by war, daily life is an exhausting struggle—from searching for clean water and food for their families without constant harassment to facing threats of domestic violence in their own homes. They face a startling degree of isolation, violence and insecurity.

In our recent report, “Are We Listening? Acting on Our Commitments to Women and Girls Affected by the Syrian Conflict,” the IRC brings to light the voices of Syrian women and girls and the barriers they face. Read the report in English or العربية; and annex on International Commitments to Women and Girls, with Arabic annex here. Visit the IRC special site here:  http://www.rescue.org/arewelistening.

Three Years of Conflict and Displacement: How this Crisis is Impacting Syrian Women and Girls

In early 2014, IRC released a visibility paper about the devastating impact of the Syrian civil war on women and girls.  This paper details women and girls’ efforts to escape the conflict in Syria, which have exposed them to serious risks, both during flight and as refugees in camps and cities in Iraq, Jordan, Turkey and Lebanon.  Read more here.

Lifesaving, Not Optional provides an overview of gender-based violence responses in four emergencies – Haiti, Pakistan, the Horn of Africa and the Democratic Republic of Congo (DRC) – to better understand how donors and humanitarian agencies respond across a variety of contexts. Read more here. 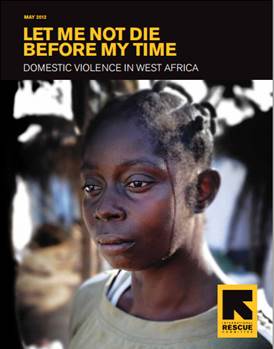 Let Me Not Die Before My Time

In 2012, IRC released a groundbreaking report on domestic violence in West Africa. The report places the issue of domestic violence, which globally will affect 1 in 3 women in their lifetime, firmly on the agenda of the humanitarian community. Read the report Let Me Not Die Before my Time here.